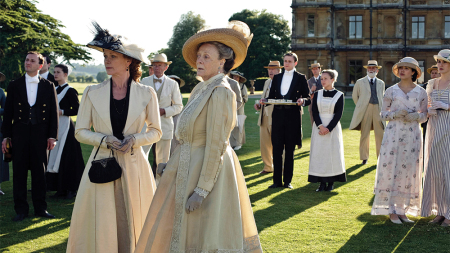 A CARNIVAL FILMS PRODUCTION FOR ITV1...DOWNTON ABBEY...EPISODE 7..ITVís new costume drama series, Downton Abbey, written and created by Oscar-winning writer Julian Fellowes and made by Carnival Films for ITV will star Maggie Smith as Violet, Dowager Countess of Grantham, Hugh Bonneville as Robert, Earl of Grantham and Elizabeth McGovern as Robertís wife, Cora, Countess of Grantham. ..They will lead an all-star cast, which also includes: Penelope Wilton, Dan Stevens, Michelle Dockery, Jim Carter, Phyllis Logan, Lesley Nicol, Siobhan Finneran, Rob James Collier, Joanne Froggatt and Rose Leslie. ..Set in an Edwardian country house in 1912, Downton Abbey will portray the lives of the Crawley family and the servants who work for them. ..PICTURED: SAMANTHA BOND as Lady Rosamund Painswick...This photograph is (C) ITV Plc/CARNIVAL FILMS and can only be reproduced for editorial purposes directly in connection with the programme or event mentioned above, or ITV plc. Once made available by ITV plc Picture Desk, this photograph can be reproduced once only up until the transmission [TX] date and no reproduction fee will be charged. Any subsequent usage may incur a fee. This photograph must not be manipulated [excluding basic cropping] in a manner which alters the visual appearance of the person photographed deemed detrimental or inappropriate by ITV plc Picture Desk. This photograph must not be syndicated to any other company, publication or website, or permanently archived, without the express written permission of ITV Plc Picture Desk. Full Terms and conditions are available on the website www.itvpictures.com..Photographer: NICK BRIGGS....For further information please contact:.patrick.smith@itv.com

We are headed back to Downton, Focus Features has officially announced that the Downton Abbey sequel has started production with the original main cast returning.

It was also revealed that Downton Abbey 2 will be released in theaters on December 22nd, 2021. The series originally premiered on the British network ITV, and made its way to American audiences. It became a much-talked-about series thanks to its compelling storytelling, superior character development, and writing that excelled made it an undeniably great series.

The first film followed a royal visit to the Crawley family and Downton staff from the King and Queen of England. It’s unclear what the plot for the sequel will entail. Downton Abbey creator Julian Fellowes has returned to write the film’s screenplay, with Simon Curtis (My Week with Marilyn) directing.

In addition to the original cast, Hugh Dancy, Laura Haddock, Nathalie Baye, and Dominic West will be joining the sequel.

“There’s no place like home for the holidays, and we can’t imagine a better gift than getting to reunite with Julian, Gareth, and the entire Downton family in 2021 to bring the Crawley’s back home for their fans.”