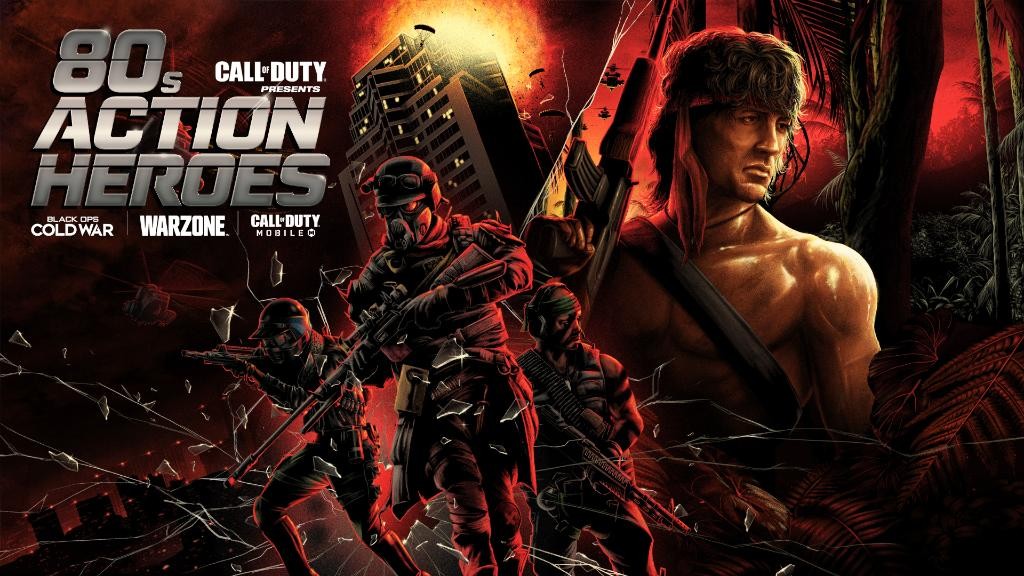 The ’80s Action Hero update is among us, and Treyarch has revealed what is going to be included in the season 3 midseason patch. Of course, as previously revealed, they will be adding to of films most famous action stars to the game, and some iconic locations from their popular films dropping in Warzone. The season is also going to include all of the previously announced features that includes new weapons and new maps.

The biggest additions in this update — outside of the Johns Rambo and McClane — are the changes to the Verdansk ’84 Warzone map, which will now include locations from Die Hard and Rambo. The Downtown area of the map now features Nakatomi Plaza, the setting for the first Die Hard, with an interior that should be recognizable to fans of the movie. Nakatomi Plaza is now the tallest building in Warzone.

Elsewhere on Verdansk ’84, there are several new Rambo-themed points of interest. There are now 10 Survival Camps spread out across the map, designed off of Rambo: First Blood Part II. Inside these camps, players can find better loot and dog tags to collect, which may eventually lead to a reward if they collect enough. There is also a new CIA Outpost in one of Verdansk’s aircraft hangers, designed for tracking Rambo down.

Now, in addition to all of this, Warzone players get one more special treat. The new update will be adding a combat bow that you can find around the map in Verdansk or Rebirth Island. It packs a real punch and has arrows that explode on impact. The Ballistic Knife is also headed this way, which Black Ops players should be very familiar with.

Two new game modes are also dropping, The first, which will be available at launch, is Die Hardpoint; it’s similar to the standard Hardpoint mode but gives players buffs after they capture a Hardpoint. The next mode, which will be available in week 2, is called Rambo’s Gun Game; it introduces more firepower to the standard Gun Game mode and gives every player a Stimshot to keep them in the action.

Call of Duty: Black Ops Cold War and Warzone’s season 3 Reloaded update includes dozens of more changes that can be found in Treyarch’s official blog post. The ’80s Action Hero update will also cross over into Call of Duty: Mobile, which will add John McClane and John Rambo to the game, as well as a Guns Blazing mode that lets players transform into one of the two heroes.

The season 3 Reloaded update will go live in Black Ops Cold War and Warzone on May 20 at midnight ET, and in Call of Duty: Mobile on May 20 at 8 p.m. ET.