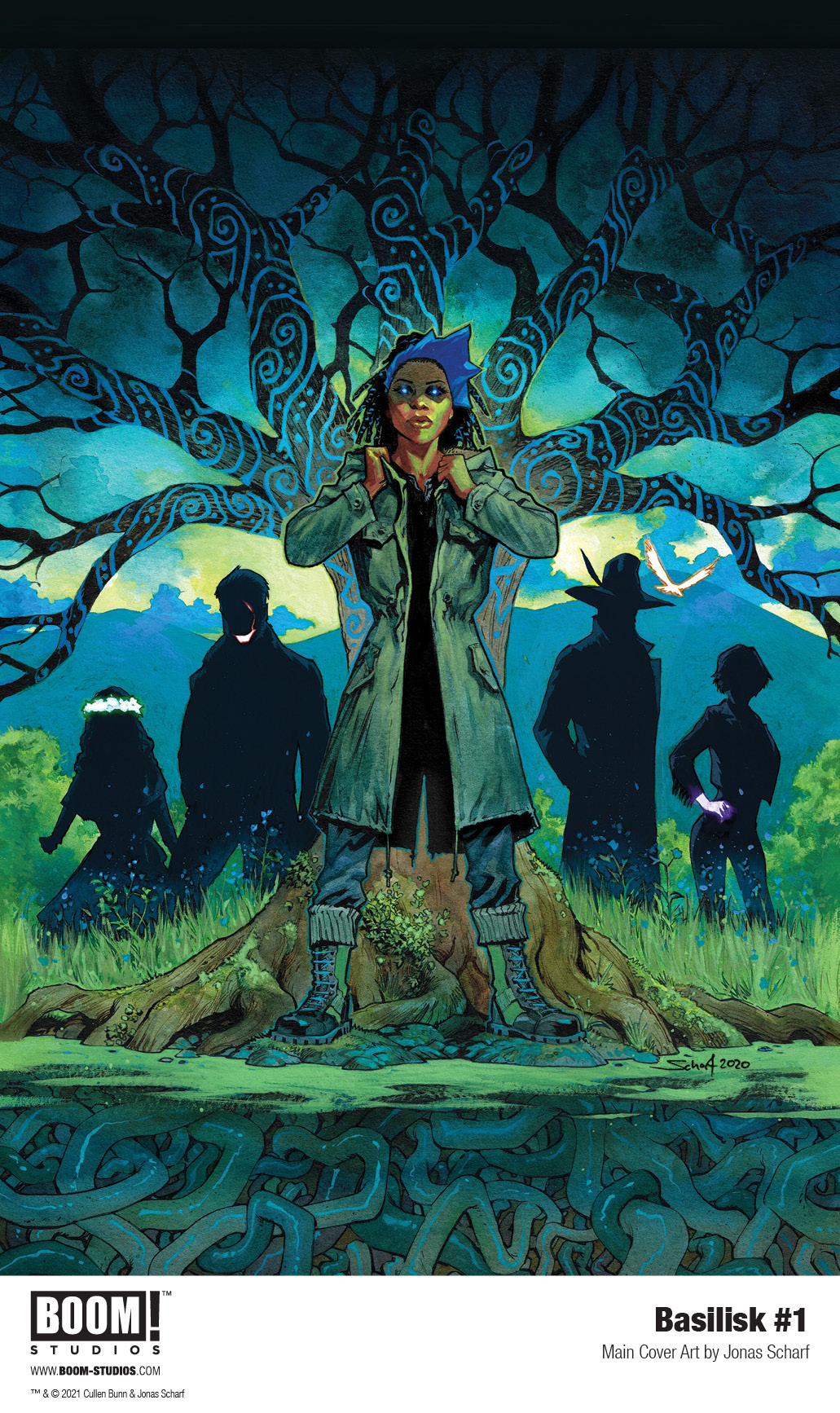 BOOM! Studios today announced BASILISK, a brand new supernatural horror series from New York Times bestselling horror writer Cullen Bunn (Harrow County), acclaimed artist Jonas Scharf (Avengers of the Wasteland), colorist Alex Guimarães, and letterer Ed Dukeshire, unleashing an epic tale of vengeance and survival as a monstrous threat ravages the countryside and the only ones who can stop it are mortal enemies, available in June 2021.

Who Can Stop The Chimera? Five individuals bound by a cult-like hivemind, they terrorize small towns with their horrifying supernatural sense-based powers, leaving death and destruction in their wake. Regan, one of the Chimera, escaped and has been in hiding, with her murderous eyes bound, overcome with guilt.  Until now… when a victim from her past forces her to hunt down the other four of her kind.

Cullen Bunn is the writer of The Empty Man, Bone Parish, and The Unsound from BOOM! Studios. He is also the writer of The Sixth Gun, Harrow County, and Regression. You can find out more about his work at www.cullenbunn.com or by following him on Twitter (@cullenbunn).

“BASILISK is an epic, dark, fantasy horror story, and I can’t wait for readers to meet the players on both sides of this tale of revenge. Here we have a woman who has absolutely nothing left to lose hunting down a group of would-be gods, each of whom can use one of the five senses to destroy those around them. They’re terrifying in their own way–the heroes and the villains,”

“This is another collaboration with the amazing Jonas Scharf, who worked with me on Bone Parish, and I think his work here is even more amazing, even more deific, even more haunting.”

Jonas Scharf is a comic book artist and illustrator from Nuremberg, Germany. Since his professional debut in 2016, his work has spanned many genres, from horror books like Bone Parish for BOOM! Studios to superhero comics for Marvel Entertainment.

“Getting back together with the team of Bone Parish and exploring a new original horror story with them has been an absolute pleasure. In BASILISK, we draw inspiration from mythology and ground it deep within the mountains of Appalachia as we follow a mysterious group of superpowered individuals called the Chimera,”

“I‘m excited for people to check it out!”

“Cullen is a true genius when it comes to horror — this series takes full advantage of his vast knowledge of the genre, as well as Jonas’s evocative and dark illustrative style, to tell the terrifying tale of ancient legends hidden within the dark shadows of our contemporary landscape,”

“Get ready to face your demons and your fears as we follow the bloody trail of death and destruction left in the wake of the monsters within the pages of BASILISK.”

Print copies of BASILISK #1 will be available for sale in June 2021 exclusively at local comic book shops (use comicshoplocator.com to find the nearest one) or at the BOOM! Studios webstore. Digital copies can be purchased from content providers, including comiXology, iBooks, Google Play, and Madefire.