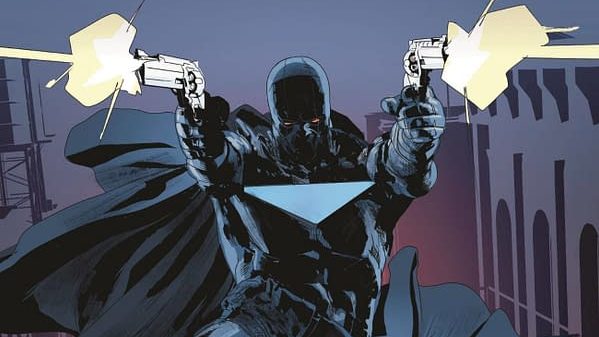 Dark Horse along with creators Mike Richardson, and Jordi Armengol have brought us a new vigilante that may resemble a popular DC figure, but gives us an interpretation of him that DC would never dare to explore. In the new three-issue miniseries Cloaked we see a masked vigilante in all black delivering some pretty hardcore justice. It’s a mature take on the vigilante superhero that we don’t see often and even in its premiere issue we see the lines of morality and right from wrong blurred regardless of who the target is, but it’s intriguing, to say the least and it explores a side of superheroism that really falls closer to reality than what we typically see in comics.

In Cloaked, we are introduced to the vigilante known as The Sentinel. The vigilante is a gun-toting hero to the public that stops criminals dead in their tracks… literally. This has earned him another name to the criminal world where they refer to him as The Reaper. It doesn’t take long to see the familiarities between Sentinel and Batman and it seems to be done purposely as much of the vigilante is kept hidden except for the few tropes aimed at the DC hero.

Richardson does a killer job of creating an intriguing narrative that doesn’t take long to hook us as we are treated to some heavy street justice and introduction to the character that is just brought to life from the page thanks to Armengol’s crazy realistic artwork. Everything down to the details on the guns and city streets just makes you feel like you are sitting on the side of the street watching this entire story unfold. Then we get further involved when we are pulled into The Sentinel seemingly disappearing off the face of the Earth which leads to a mystery that needs solving that we are going to be along for the ride for. We are then introduced to Roger Stevens, who is the average everyday Joe that is recruited by a wealthy man to find out what happened to this vigilante.

This leads Stevens to The Sentinel’s one-time sidekick whose identity was revealed and led to his five minutes of fame. This take on Robin if you will is not your typical orphan child that was adopted by a billionaire spending his nights as a vigilante, but instead was playing sidekick for 20 bucks a show. He then spun his not always so interesting adventures with The Sentinel and it led to his recounting of the stories in which he no longer knows truth from lie and things get dark, to say the least.

The series shows much promise and really pushed an interesting narrative on the side of superheroism that we all wonder about, but never really get exposed to. We see two sides of a hero as well, the hero the public eye saw as well as an inside look to the person outside of that public eye who didn’t act very heroic and this has opened a compelling mystery that feels like it will lead us down an overwhelming path with only a few issues to unravel it all. I for one am strapped in and ready for this wild ride.