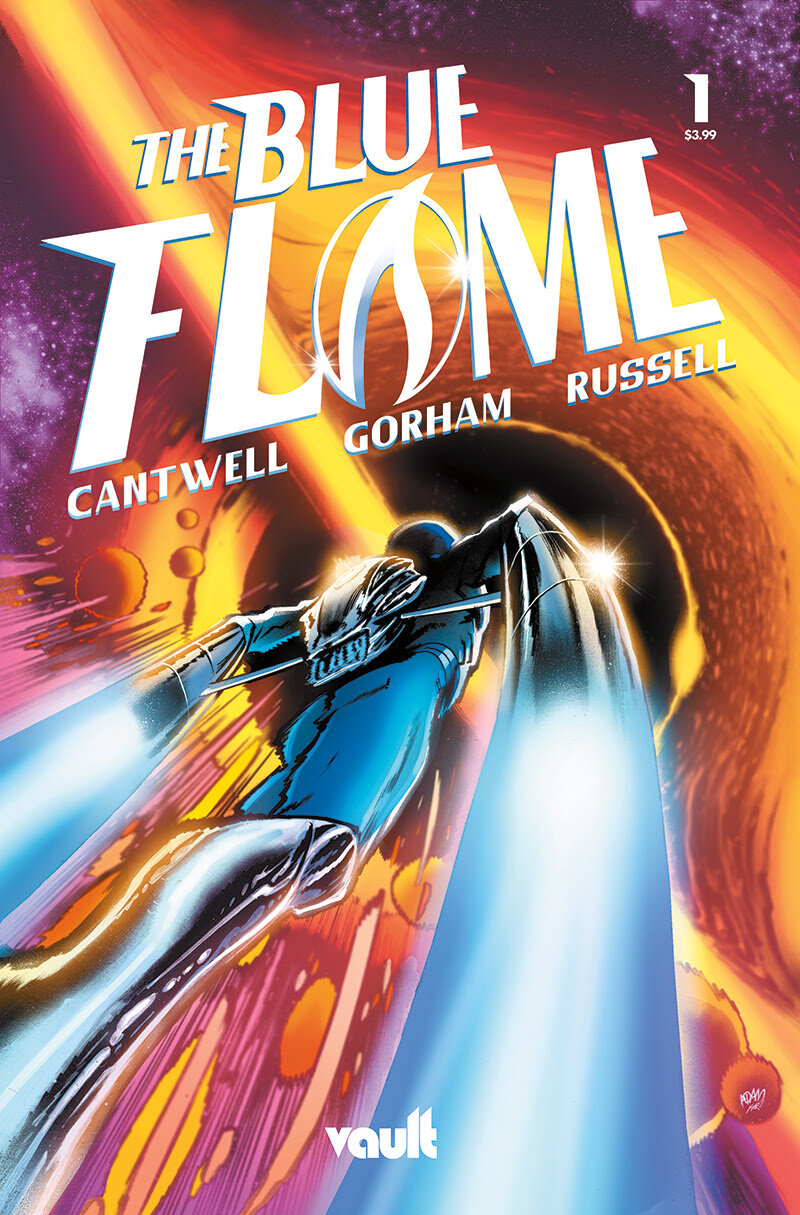 “Contrary to what Adam’s incredible cosmic art might suggest, the concept of Blue Flame was actually born out of a real feeling of helplessness,” said Cantwell. “So far the 21st century has provided some truly intense and infinitely complex tragedy that I believe challenges the very idea of what it means to be human, let alone superhuman. Personally—in the face of so much compounding unprecedented anxiety and strife—I’ve recently been in full retreat mode culturally as an adult. I have found myself dreaming of farther and farther away places, and escaping into the more and more fantastical, if just for some way to stay sane. That’s because the truth remains that we are all struggling in a very difficult contemporary reality with all sorts of seemingly insurmountable problems that don’t seem to be easily solved by anything.”

“So as someone who has found solace in super hero books since a young age, I thought, what if we took that very solace away, even from the super hero who is supposed to provide it? Our story is bifurcated into two “worlds”: one is a high stakes cosmic quest that is so daunting it threatens to overwhelm even this idealized noble hero, and the other is the daily survival of a real man in a real world beset by all kinds of real problems. It feels at times that we are all constantly living in the wake of tragedy or on the crest of impending doom. Has the weight of that become so heavy that the idea of an ever-reliable hero is now irrelevant?”

Vault’s Editor-in-Chief, Adrian Wassel, added, “The Blue Flame is either the truest superhero story I’ve read, or it’s not a superhero story at all. Maybe that sounds ridiculous, but it’s that dichotomy that drew me to The Blue Flame in the first place, and made it fit so well within Vault’s catalogue. The series is, really, the life of a man split between three realities played out in triptych. It is also a trial story. A trial for all of humanity, where flying around and shooting flames won’t do our hero (or us!) much good; and instead, we’d all rather have a seasoned litigator ready to defend us. No matter which way you slice it, The Blue Flame is science fiction of the most ambitious variety. Most days, I don’t think of it as a superhero story at all. Other days, if you asked me what story most carefully handles the question—What does it mean to save humanity?—I’d say The Blue Flame. And isn’t that the whole point of a superhero?”

The Blue Flame #1 will hit store shelves in May 2021. Preorder at your local comic book shop. To find a local comic shop near you. Go to Comic Shop Locator. You can also visit the Official Vault Comics Website for more information on The Blue Flame and many more titles.

Assassin’s Apprentice: Jody Houser and Robin Hobb Break Down the Launch of the ‘Farseer Trilogy’ Adaptation

Hellcat: Patsy Walker Claws Her Way into Her Own Solo Series