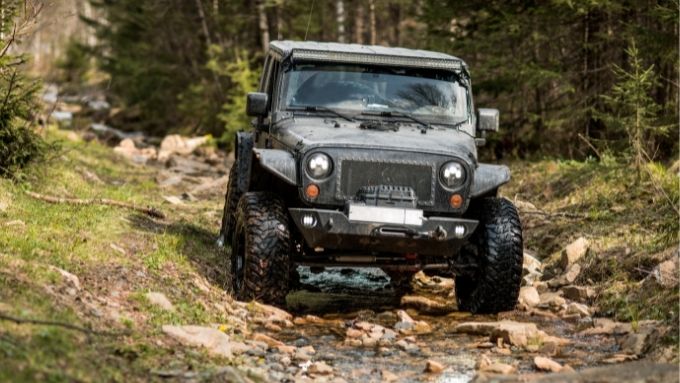 The Jeep fleet has fascinated the public for decades now, thanks to its distinct design, powerful off-roading capabilities, and vibrant personality. This car encapsulates a rugged, free-spirited demeanor, so it’s no wonder that these 4x4s have made a few big appearances on the silver screen. Here are the four best movies that featured a jeep vehicle.

Back to the Future is an American classic that features loads of cool technology, especially when it comes to automobiles. This movie is most famous for showcasing the futuristic DeLorean DMC-12, driven by Doc Brown and his compeer Marty McFly. However, a Jeep CJ-7 features briefly during the film. In the iconic opening scene, McFly hangs on to the vehicle while riding his skateboard as he’s running late for school. The CJ-7 is a lovely baby blue color with leather seats and a mean, doorless and roofless design.

The Cars series introduced many children to countless classic cars from around the world. The Pixar animators spent hours of research and hard work meticulously replicating accurate vehicle models and bringing them to life with interesting characters. Sarge is a WWII-model Jeep Willys, complete with a khaki green paint job, off-roading treads, and an army soft-top roof. He’s a resident of Radiator Springs, and his gruff, veteran persona really brings this Jeep to life.

We all love a great rom-com, and 1995 hit Clueless is the perfect sappy film for a night in with a sweetheart or friends. Alicia Silverstone’s character, Cher Horowitz,drives a sparkling white Jeep Wrangler YJ, one of the first iterations of the Wrangler fleet. The YJ features prominently in arguably the most famous scene of the movie, during which Cher stumbles her way through a disastrous driver’s test. This car helps solidify the haughtiness of affluent children growing up in Southern California at that time.

You can’t talk about movies with Jeeps without mentioning the original Jurassic Park. This film was groundbreaking at the time and captivated audiences all across the globe. The dino amusement park featured many attractions, exhibits, and rides, but the coolest part of the setting was the Wrangler Sahara YJs. In the film, the staff used these Jeeps for transportation and, eventually, to outrun a very angry T. Rex.

These 4x4s had an iconic tan/red paint job with a large, circular Jurrasic Park logo slapped on the doors. The classic convertible Wrangler design helped catapult the Jeep brand to new heights, and the same car even reappeared in one of the more recent movies in the series, Jurassic World.

One could argue that each of these four best movies that featured a Jeep vehicle played a significant role in the popularity of the Jeep brand. No matter the genre, this classic car finds a way to make a cameo.