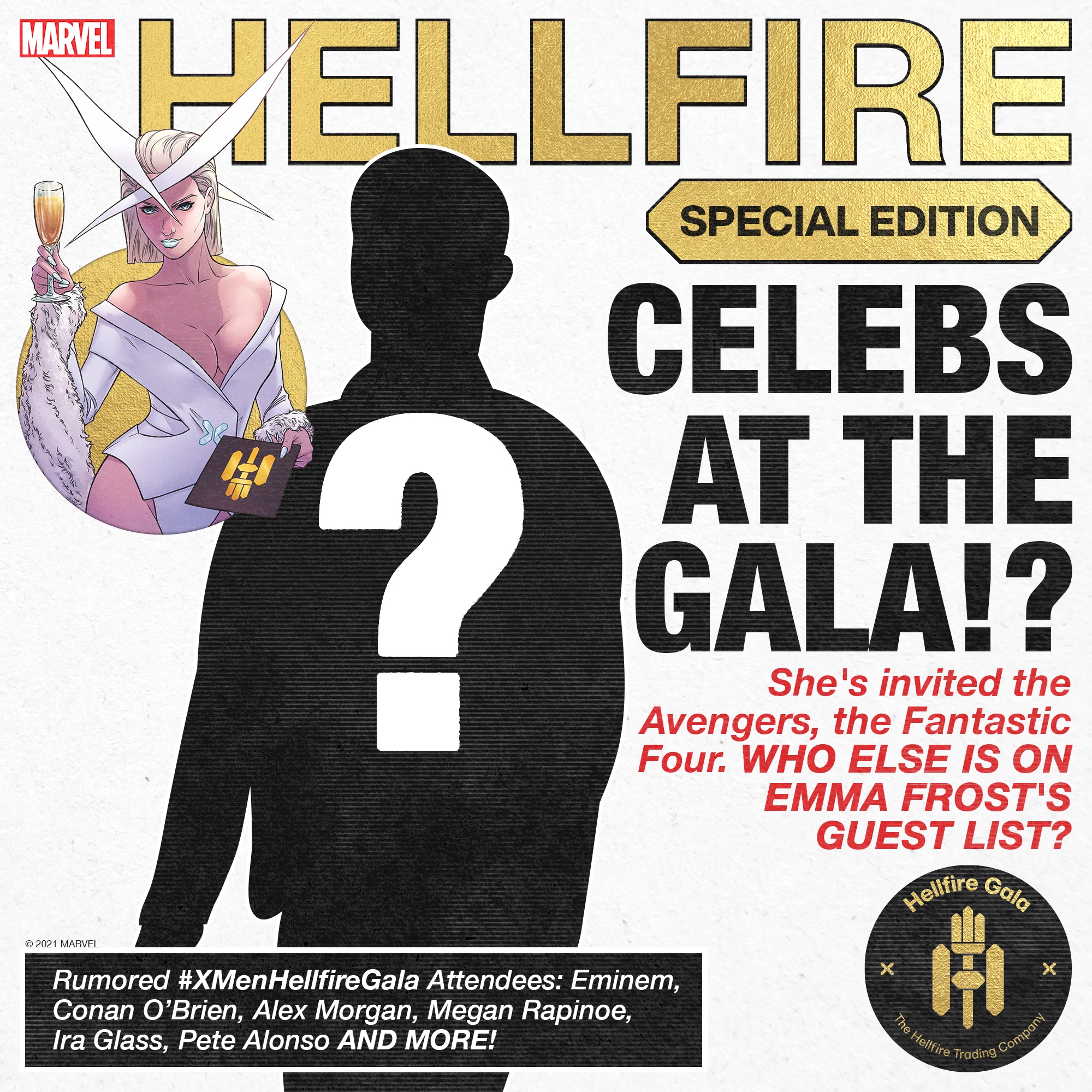 Mutant fashion, influence, and celebrity come together during the X-Men’s inaugural Hellfire Gala, featuring debut appearances by the world’s stars

Find your favorite real-world celebrities in the pages of X-Men history!

This June, one unforgettable night will determine the future of the Marvel Universe. The world of mutants will never be the same – and the world we live in is not going to miss it! For Krakoa’s biggest night, real-world celebrities from sports, entertainment, media and beyond will make their biggest Marvel Comics appearances and debuts alongside the X-Men, Avengers, and more in the pages of Marvel’s inaugural mutant event of the year: THE HELLFIRE GALA.

Told across 12 different tie-in titles, the Hellfire Gala will unfold through different perspectives and viewpoints surrounding a single night on Krakoa, the new mutant nation established in Jonathan Hickman’s groundbreaking House of X and Powers of X. As Krakoa opens its gates to the world, the Gala will go down in history for its shocking twists, incredible Mutant Fashion looks, and surprise appearances from heroes and celebrities alike.

“The Hellfire Gala will be the culmination of months of anticipation, and as one of the biggest nights in X-Men history, it only made sense that the nation of Krakoa would invite some of the world’s biggest stars to witness it for themselves,”

“We thank all of our special guests for joining us for this exclusive in-world event, along with the incredible artists who brought them to life on the page.”

Guests at the Gala will include talk show hosts, sports superstars, world-renowned musicians, writers, actors, and other icons, including Emmy, Grammy, Oscar, and Peabody Award winners, FIFA World Cup Champions, Olympic gold medalists, and more. Figures like Eminem, Conan O’Brien, Alex Morgan, Megan Rapinoe, Ira Glass, and Pete Alonso, are on the guest list – and the list keeps growing. Who will be toasting to Krakoa’s success? Who will be mingling with the Avengers? And who is speaking with the new leader of the X-Men?

As the Reign of X continues, mutantkind’s hottest event is not one to miss. Be the first to find all of your favorite characters, celebrity cameos, and more during THE HELLFIRE GALA this June!