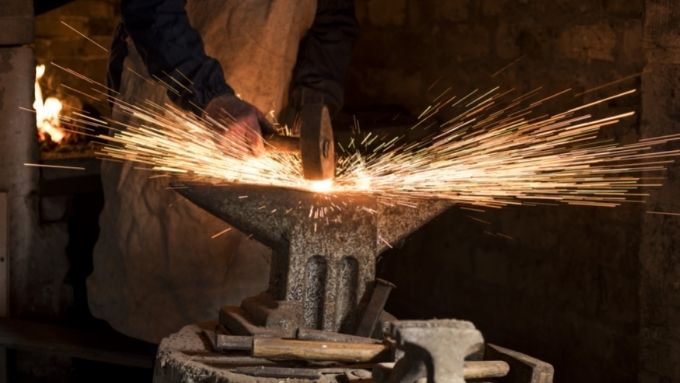 Both reality and fictional TV shows alike feature blacksmiths. In fact, there are entire shows devoted to blacksmithing and the products you can create.

Forged in Fire is a reality TV show dedicated to the blade-making side of blacksmithing. Each episode starts a new competition that involves four bladesmiths. Each episode typically follows three rounds of bladesmithing, where one contestant is eliminated each round until only one remains. This show features everyday blacksmiths as competitors and veterans of the craft, who judge their creations. You may know Doug Marcaida, David Baker, Ben Abbott, and other big names from the show on the judging panel.

Going back to the fictional side of blacksmiths in popular media, Game of Thrones was a popular TV show with plenty of blacksmithing references and characters. One character you might recognize from both the TV series and book series, known as A Song of Ice and Fire, is Gendry. Fans of the show may remember Gendry as an apprentice blacksmith who upheld his father’s tradition of wielding hammers before leaving King’s Landing.

Board games and video games alike are two more forms of media that heavily feature blacksmiths in their stories and materials. In fact, these pastimes are where many of us form an image of the fantasy blacksmith.

The fantasy tabletop role-playing game Dungeons and Dragons (lovingly referred to as “D&D” by many) is packed with blacksmithing references and characters. If you’re familiar with this RPG game, you may have heard of the Artificer class, which heavily draws inspiration from classic blacksmithing techniques to create magical items. If you aren’t playing a blacksmith yourself through this class, odds are you will encounter a blacksmith along your journey, as there are many sprinkled throughout the D&D sourcebooks.

There are almost too many blacksmithing references in video games to count. Popular gaming series like Final Fantasy, The Legend of Zelda, World of Warcraft, The Elder Scrolls, Skyrim, and more all feature fan-favorite blacksmith characters. Many smaller games also feature blacksmithing characters and mechanics. In fact, most games that feature fantasy weapons will have some sort of blacksmithing mechanic or character tied in to improve these weapons.