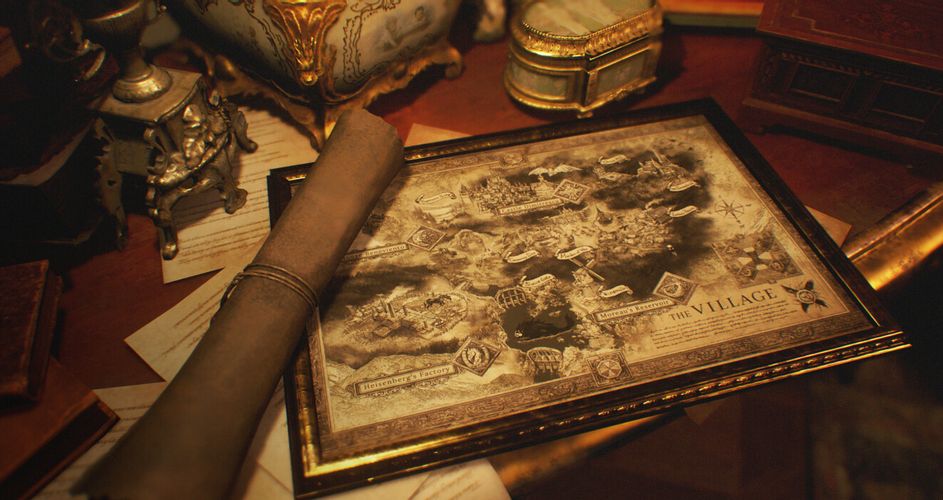 Capcom has revealed more images and information, including a first look at the perplexing Mother Miranda and the game’s map.

With Capcom’s next installment in the Resident Evil franchise on the horizon, we have been graced with details as to what we can expect to see in Resident Evil Village, this includes a map of the playable area and a bit more information on Mother Miranda. The map shows us four specific areas of the village, each with its own emblem, including Castle Dimitrescu. Other locales include Heisenberg’s Factory and Moreau’s Reservoir.

The devs have also announced an upcoming Resident Evil Showcase that will give us a new trailer, gameplay and fingers crossed, information on when and if we are getting a second demo as promised. If you played the first demo, you have already come face to face with Mother Miranda, she was more of a visual nod than an actual gameplay interaction and the demo itself was designed to showcase the visuals of the environment you will find yourself in. My hopes are that if we do get a second demo, it will be more gameplay focused on what we will get in the final build of the game.

Capcom also gave us information on Mother Miranda, who fans had suspected was the character in the mask shown in some promo art, and well, you were right fans! Previously the mysterious voice at the end of the phone conversation with Lady Dimitrescu, we now know that Mother Miranda is a Deity of sorts, worshipped by the village residents.

“For Mother Miranda, I think it’s better for the players to find out for themselves by playing the game,” Sato said. “But I’ll say this: Mother Miranda and the inner side of her character are extremely important factors in the game.”

Capcom has confirmed that Mother Miranda is,

“a presence worshipped by the villagers”

Art director Tomonori Takano told IGN about the symbolism of her mask, which extends to the aesthetics of Resident Evil Village as a whole:

“The mask resembles a crow’s beak,”

“As a symbol of horror, crows function as a theme for Village in its entirety as well, and they appear in the actual game. Since she has a symbolic role within the village, we implemented that same design theme for Mother Miranda.”

Let’s hope the upcoming showcase gives us more to work with, but if anyone who knows Capcom or has played the Resident Evil franchise, we may be left with many questions unanswered when it arrives.