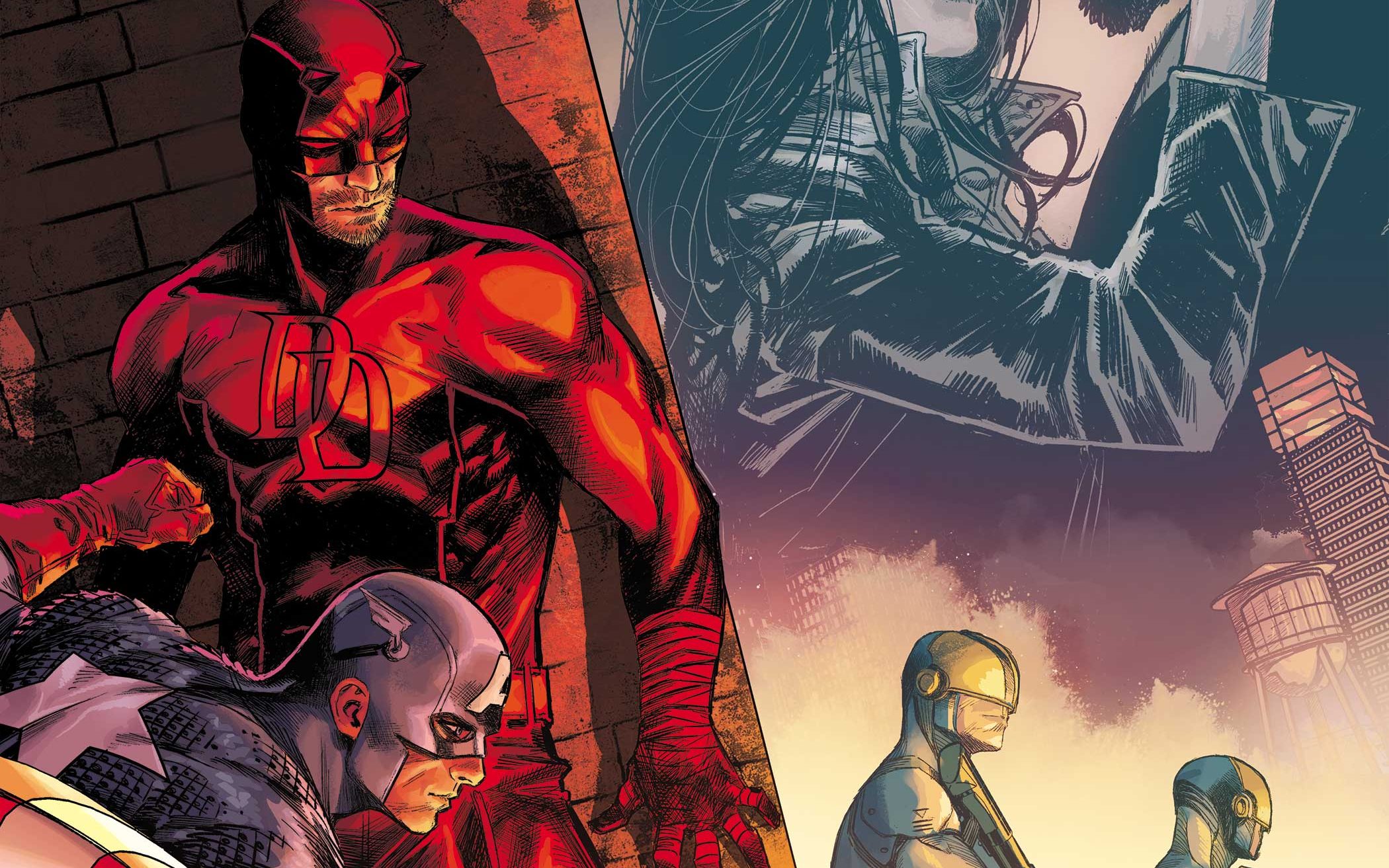 DEVIL’S REIGN, the upcoming Marvel Comics event spinning out of writer Chip Zdarsky and artist Marco Checchetto’s Eisner-nominated run on DAREDEVIL, kicks off in December. And come January 2022, all hell will break loose as Kingpin’s reign threatens every corner of the Marvel Universe, overtaking your favorite characters in multiple new tie-in series and one-shots.  This far-reaching saga will center around Kingpin as he embarks on a vicious quest to rid the world of every last superhero through any means necessary…

In DEVIL’S REIGN #3, New York City stands at the brink of disaster as Mayor Wilson Fisk has at last reached a breaking point, with an army of super villains at his back, and a deputized crew of super villainous Thunderbolts on the streets and in every police station. Worse still, he’s put the Marvel Universe’s most powerful tools into (all six) hands of one of its most diabolical minds, unaware of the disaster that could befall the entire city as a result! As a gauntlet of super villains stand between Captain America, Iron Man, Spider-Man and Daredevil and liberating the heroes who have been captured by Fisk’s law enforcement, they’re ALL about to learn that the danger is closer than they ever thought possible.

In addition, Chip Zdarsky will continue his landmark Daredevil run in DAREDEVIL: WOMAN WITHOUT FEAR! With art by Rafael De Latorre, this limited series will star Elektra as Daredevil in a pulse-pounding chapter that spins directly out of the shocking revelations in the pages of DEVIL’S REIGN!

Elektra is the world’s deadliest assassin — and she’s taken a vow not to kill. Someone puts themselves directly in her path with deadly consequences. What else would you expect from Marvel’s Greatest Hunter?

“When we were planning out Devil’s Reign it becomes apparent early on that Elektra’s story is too big to be contained in the main series,” Zdarsky told ComicBook.com. “Wilson Fisk has unearthed her darkest secret and I’m super excited for readers to see the fallout in this series!”

And check out these other exciting tie-ins coming in January:

Writer Gerry Duggan and artist Phil Noto reunite in DEVIL’S REIGN: X-MEN. Emma Frost has many skeletons in her closet, but only one of them is currently Mayor of New York City. The truth about the White Queen’s secret past with the Kingpin of Crime comes to light. As Wilson Fisk makes his play, will his old ally Emma Frost stand in his way? Or protect the secrets they share?

Collin Kelly and Jackson Lanzing, the writing duo behind the hit current series KANG THE CONQUEROR, team up with artist Nico Leon in DEVIL’S REIGN: WINTER SOLDIER. A power-mad Mayor Fisk has been gathering information on superheroes. How far will Bucky Barnes go to steal the file on his own shadowy, half-remembered past as the Winter Soldier? And what horrible revelation awaits him if he can get past the Kingpin? Some secrets are meant to stay buried. And some doors are meant to stay closed.

“Chip and Marco’s Daredevil has been one of our favorite books on the shelves since its debut, so of course the Hivemind is deeply excited to be contributing to its culmination in Devil’s Reign,” Lanzing told SYFY Wire. “Kingpin has never been a more terrifying villain than he is right now – which lets Collin, Nico and I go all-out with a shadow-soaked showdown between Fisk and one of the few fighters alive who might be able to stand against him: Bucky Barnes.”

Meet Kingpin’s terrifying new team of villains in writer Clay McLeod Chapman and artist Manuel Garcia’s DEVIL’S REIGN: VILLAINS FOR HIRE. New York City is on a razor’s edge, and there’s only one force fighting for the rule of law in the chaos: Wilson Fisk’s Thunderbolts!

Make way for a shocking twist on the Fantastic Four in Zac Thompson and Davide Tinto’s DEVIL’S REIGN: SUPERIOR FOUR. Otto Octavius has acquired a taste for the infinite. Empowered by Wilson Fisk, Doctor Octopus faces a tantalizing, unprecedented opportunity to scour the Multiverse, amassing an army of…himself. An army to march on our reality, proving Otto’s supremacy — and it all begins with his Superior Four!

“Participating in the huge scope of Chip and Marco’s Devil’s Reign event is thrilling,” Thompson told CBR. “Getting to do it with a Doctor Octopus at the center is a dream come true. Superior Four is the type of insane premise that only works in comics and Davide and I are just having a blast.”

Kingpin turns up the heat in LUKE CAGE: CITY OF FIRE #2 by Ho Che Anderson and Ray-Anthony Height. Luke Cage and Daredevil are on a dangerous journey across New York City to deliver someone to a safe house, but to do so, they must first get through the lethal Regulators, angry mobs, and the mayor himself, Wilson Fisk! The issue will serve as a prelude to the event and introduce a new villain known as Jo Rockhead.

“The first time I wrote the names ‘Luke Cage’ and ‘Kingpin/Wilson Fisk’ in a script I broke out into a giant grin, I thought, are you kidding me?!” Anderson told Newsarama. “These are some of the best toys in the business and I’m honored and excited to get to play with them, and in the character Jo Rockhead, to get to make my own contribution to the Marvel Universe.”

And it’s Spider-Woman VS. Spider-Woman in Karla Pacheco and Pere Pérez’s SPIDER-WOMAN #19. The series continues its’ Devil’s Reign tie-in arc that will see Jessica Drew question everything. Starting with whether she is the true Jessica Drew!

Check out the January covers now as well as a handy DEVIL’S REIGN checklist and be there when Kingpin’s rule begins this December! For more information, visit Marvel.com.