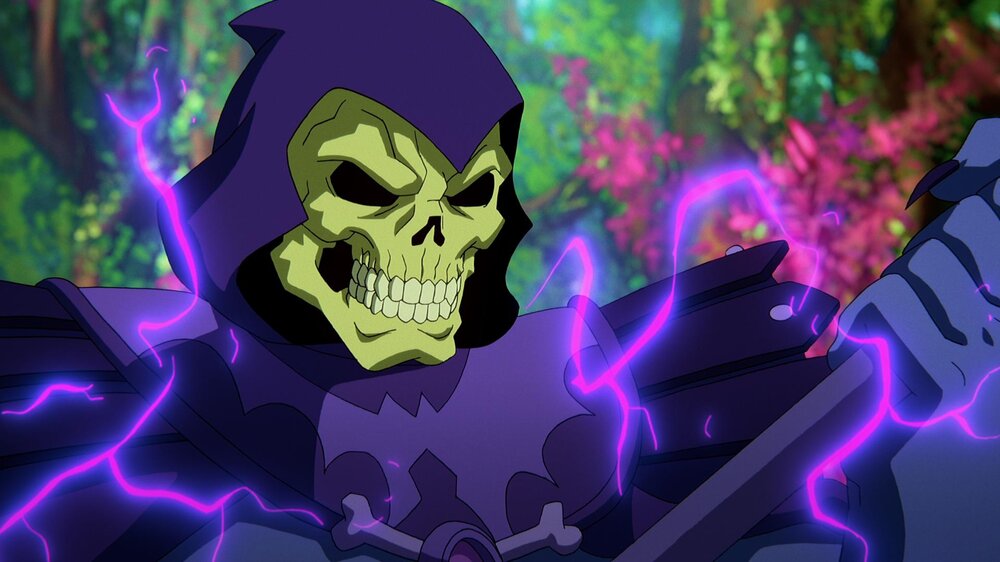 In a CG animated still from Masters of the Universe: Revelation, Skeletor, who wears a purple cloak and hood over his skull, stands in a forest with bright foliage as he grips his spear as purple electricity sparks around him.

Netflix has released a series of images from the Kevin Smith’s Masters of the Universe: Revelation animated series. Smith seemed really excited to work on the series and create something new that also gives fans of the original the nostalgia they’re looking for. While fans of the original may notice a few differences Smith and Netflix tried to keep the characters looking as true to their original forms as possible. Kevin Smith had this to say in regards to the design of the characters:

“It’s in the style of an anime…what Netflix calls an anime original…but looks exactly like our classic characters. Nobody’s been redesigned to where you’re ‘Oh that’s the 2020 version.’ They all look like they’re supposed to. And the story functions as essentially the next episode when [the 1980s original animated series] stopped.”

In this series we will find He-Man and Skeletor picking up where they left off years ago. “After a ferocious final battle forever fractures Eternia, it’s up to Teela to solve the mystery of the missing Sword of Power in a race against time to prevent the end of the Universe! Her journey will uncover the secrets of Grayskull at last. This is the epic He-Man and the Masters of the Universe saga fans have waited 35 years to see!”

The animated series has an amazing voice cast and headlining the show is Sarah Michelle Gellar as Teela, Mark Hamill as Skeletor and Chris Wood as He-Man/Prince Adam. We also have Lena Headey as Evil-Lyn, Liam Cunningham as Man-At-Arms, Griffin Newman as Orko, Stephen Root as Cringer, Diedrich Bader as King Randor, Alicia Silverstone as Queen Marlena and Susan Eisenberg as Sorceress.

Masters of the Universe: Revelation is anticipated to premiere on Netflix in 2021.