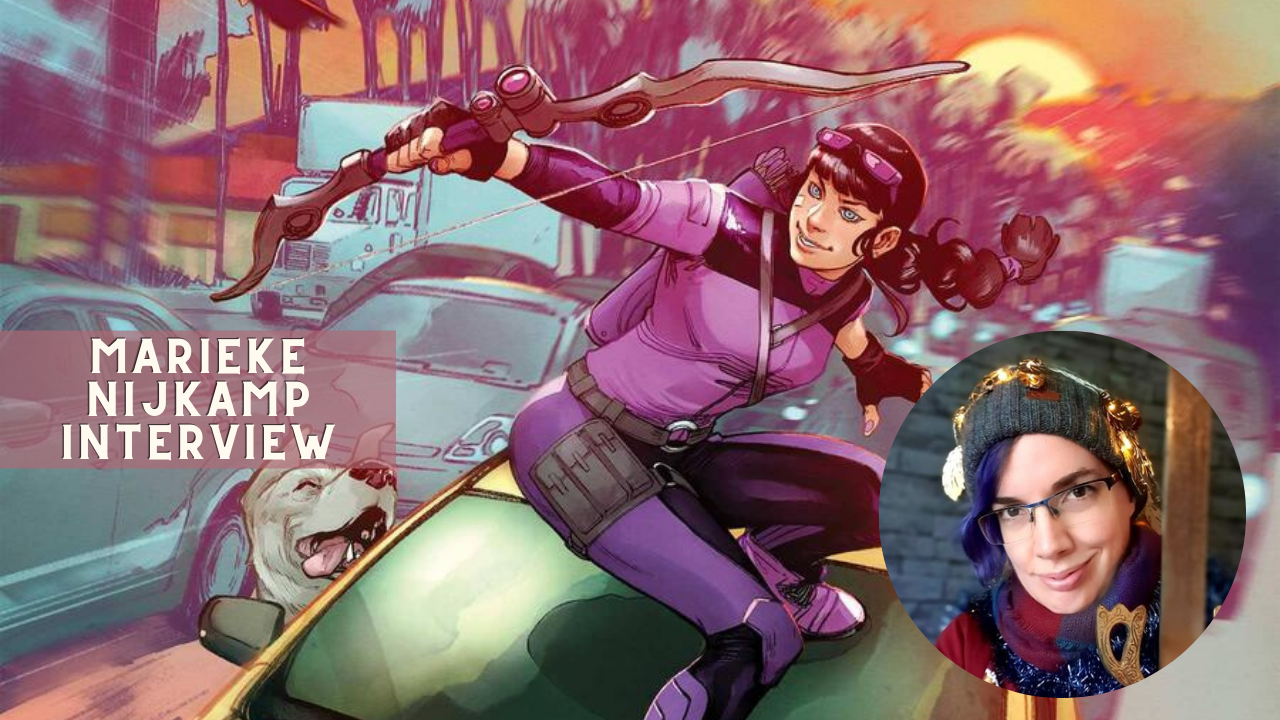 Marieke Nijkamp is an NYT Bestselling author that has brought many wonderful stories who has penned This Is Where It Ends, Before I Let Go, The Oracle Code, and brought Goosebumps: Secrets of the Swamp to IDW. She has brought us some deep stories that don’t shy away from heavy topics and circumstances of life and has captivated us with her powerful penmanship and tone. She will be taking on a new adventure with Kate Bishop, who is set to begin a new era with her upcoming mini-series coming to comic bookshelves in just a few days. We had the chance to ask Marieke a few questions about the upcoming venture into Marvel and the opportunity to tell Kate’s upcoming story.

My wonderful editor knew I loved Kate, from a conversation we had long before this series happened, so maybe that played a part when she asked me if I’d be interested in writing her!

I was absolutely already familiar with the character. I loved the various Young Avengers runs, and as someone who’s dabbled in archery, Kate was always one of those characters I gravitated toward. I loved the Fraction/Aja run of Hawkeye. I loved Kate’s LA adventures. I loved West Coast Avengers. So while I had to catch up on a few issues here and there, I already felt I knew the character quite well.

If there are any connections, they stem from working from the same, wonderful basis. Which is to say, I don’t know what’s going to happen in the Disney+ series either, but I’m so looking forward to it!

You know, I don’t really go into writing an existing character with the idea that I necessarily need to put my stamp on them. On finding new nuances and new angles that haven’t really been explored before, sure. On the way I tell and approach stories, absolutely. But at their core, I still want the characters to feel familiar to the readers who care so much about them too.

I love how immediately collaborative graphic novels and comics are, compared to prose novels. I love writing a book and completely immersing myself in a fictional world, but that’s also because I can. With comics, I’m only one keg in the radar, and arguably the least important one at that. What we do is teamwork, from Enid Balám’s amazing pencils to Oren Jr.’s inks to Brittany Peer’s colors to Joe Caramagna’s letters. And obviously Caitlin O’Connell’s fantastic edits. It’s my job to write the clearest script I can to facilitate that, and be the best team player I can be.

I can’t give away my favorite moment without spoiling something, but I will say, this series brings back a few wonderful characters, including one we haven’t seen in a long time, and I loved writing their interactions with Kate.

Also, Lucky. Every single Lucky panel is my favorite.

Oh, games, absolutely! Both video games (I played through Dragon Age: Inquisition twice this last year) and tabletop roleplaying games (from Dungeons and Dragons to Star Trek: Adventures and others.)

I’ve also recently rediscovered Lego, and I’ve been enjoying that a lot. Sometimes you don’t want to have to think but just build awesome sets.

The whole team is bringing so much joy and passion to Hawkeye: Kate Bishop. I hope you’re enjoying reading it as much as we’re enjoying making it!

Hawkeye: Kate Bishop #1 will be written by Nijkamp with interior and cover art by Enid Balam, artist Jahnoy Lindsay also contributing to the main cover. Variant covers will be made by Balam, Rachelle Rosenberg, Skottie Young, Phil Noto and Todd Nauck. The issue goes on sale on November 17th, 2021 from Marvel Comics, just one week before Hawkeye begins streaming on Disney+ on Nov. 24.