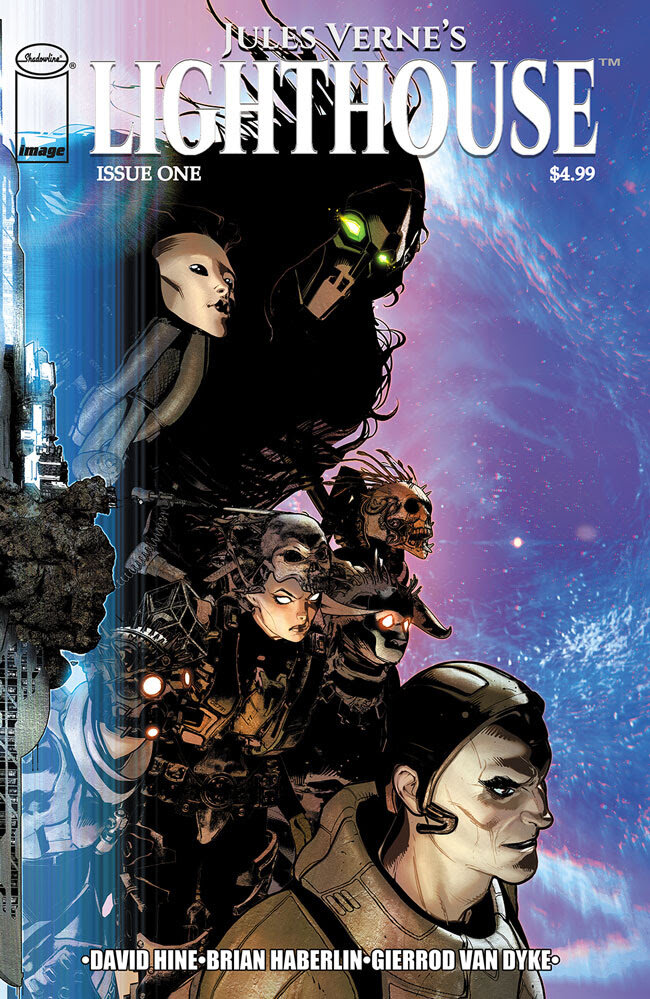 Bestselling creative duo David Hine and Brian Haberlin—who brought readers breakout hits like The Marked and Sonata—are back again this April with an all-new adventure in Jules Verne’s: Lighthouse.

Set on the high seas of space, and based upon the work of master storyteller Jules Verne, this five issue science fiction miniseries will launch from Image/Shadowline with an extra length first issue.

“Brian introduced me to this lesser-known Jules Verne story of dastardly brigands and survival on a lonely, windswept island,” said Hine. “We did the obvious thing and transformed it into an epic science-fiction tale of space piracy, wormholes, galaxy-spanning conflict and a glitchy but lovable robot called Moses.”

Jules Verne’s: Lighthouse is set at the edge of the galaxy, where there is a giant supercomputer known as the Lighthouse. The only brain powerful enough to navigate ships through a sargasso of naturally occurring wormholes, potentially cutting months or even years off a spaceship’s journey. Three humans, one alien, and a nanny bot have manned the remote station for years in relative peace until the arrival of Captain Kongre and his band of cutthroat pirates threatens the future of civilization and reveals that each of the Lighthouse crew has been hiding a shocking secret.

Haberlin added: “Lighthouse is a story that has been in my orbit for years. It’s one of Jules Verne’s most interesting stories on an emotional/psychological level. David and I love playing with flawed characters and this story is simply full of them. A tale of survival and redemption, against all odds at the far corner of the universe!”

Jules Verne’s: Lighthouse #1 will also be available for purchase across many digital platforms, including Amazon Kindle, Apple Books, comiXology, and Google Play.