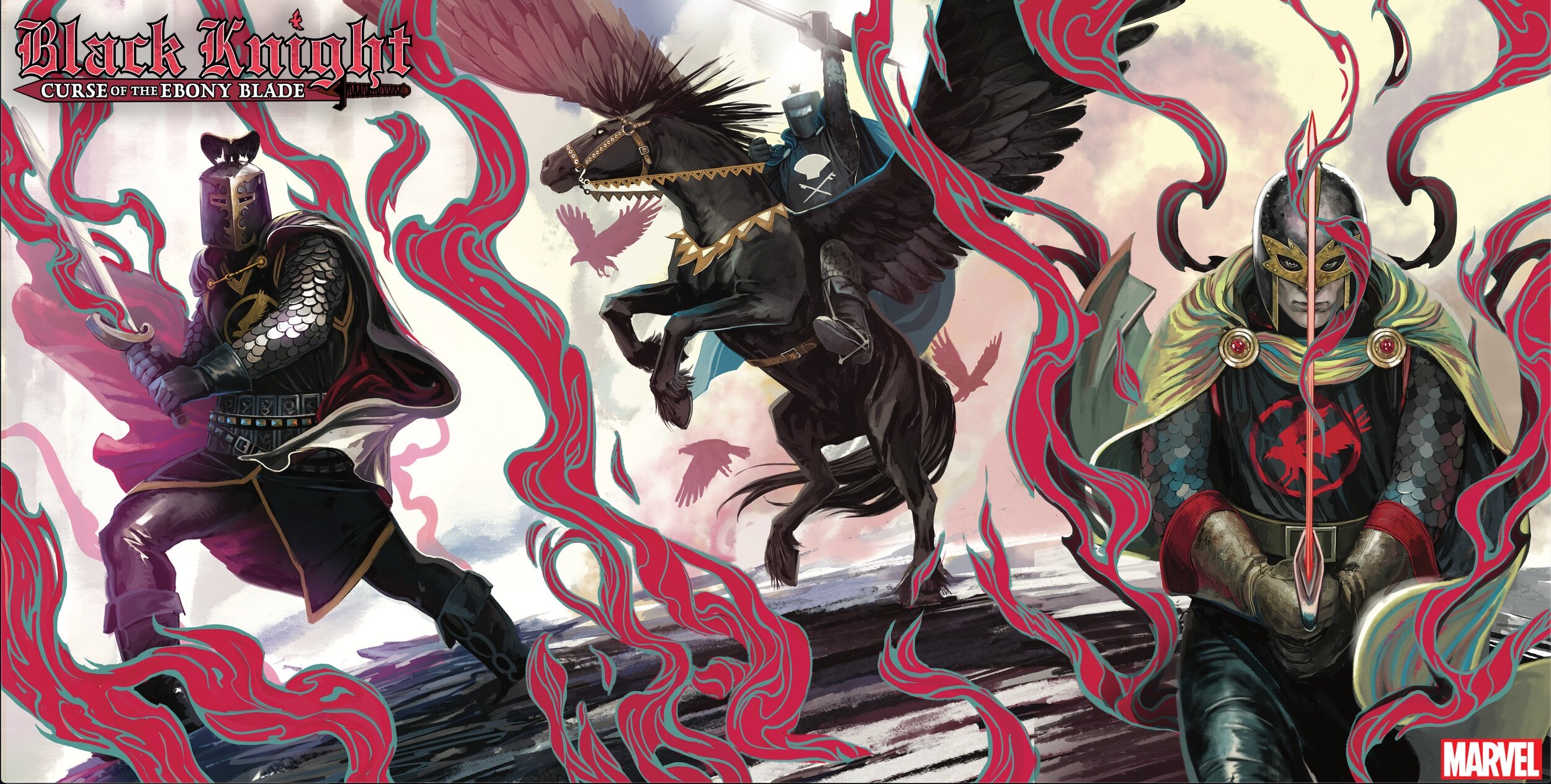 CELEBRATE THE GENERATION-SPANNING LEGACY OF BLACK KNIGHT IN NEW COVERS BY STEPHANIE HANS!

Each issue of BLACK KNIGHT: CURSE OF THE EBONY BLADE will have a connecting LEGEND OF BLACK KNIGHT VARIANT COVER by Stephanie Hans!

On March 17th, the greatest knight of them all rides again! Written by Simon Spurrier with art by Sergio Dávila, BLACK KNIGHT: CURSE OF THE EBONY BLADE #1 will expand the fascinating mythology behind the cursed hero and introduce his adventures to a new generation of fans. To celebrate this fan-favorite hero’s highly-anticipated return, acclaimed artist Stephanie Hans has crafted a stunning collection of connecting covers. These five covers will adorn each issue of the series, laying out the rich history of the Black Knight mantle from Stan Lee and Joe Maneely’s original creation to the villainous days of Nathan Garett to Dane Whitman’s time as an Avenger!

“When I was offered the opportunity to do these five iconic covers for BLACK KNIGHT: CURSE OF THE EBONY BLADE, my main concern was to find a way to link them all together, a strong concept,” Hans explained. “Flames are the constant element uniting them all. I tried to make them all as interesting together and as singular pieces. My second concern was to be able to give a solid representation of older designs, considering materials and practicality. I hope I did a good job.”

Currently holding up the legacy of the Black Night, Dane Whitman who knows all too well that welding the magical Ebony Blade comes at a terrible price: an insatiable lust for blood and mayhem that constantly threatens to swallow its owner in darkness. Will that be Dane’s fate? Following his epic battle against the KING IN BLACK, a reinvigorated Dane has a greater sense of purpose than ever before. But his sword is the key to a new enemy’s evil plan and only the Black Knight can prevent the coming death and destruction. This conflict spanning mythical Camelot to modern-day NYC will test Dane like never before and challenge everything he believes about himself, the Ebony Blade, and the entire history of the Black Knight.

Check out the first three LEGEND OF THE BLACK KNIGHT covers now and head over toMarvel.com for an exclusive sneak peek of the debut issue. Be there for the startling next chapter in the saga of Black Knight when BLACK KNIGHT: CURSE OF THE EBONY BLADE #1 hits stands on March 17th.

Cosmic Ghost Rider: Popular Version of Ghost Rider is Back for New Series