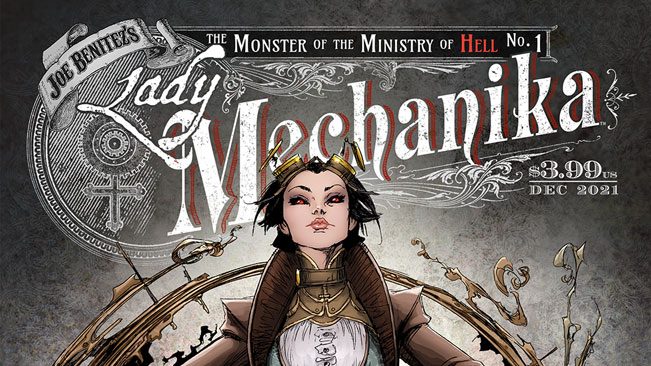 Joe Benitez explores the mysterious origins of his eponymous steampunk adventuress in the forthcoming Lady Mechanika The Monster of the Ministry of Hell. This upcoming, four-issue tale will launch from Image Comics in December.

A deluxe version with additional behind-the-scenes content on the making of this book and featuring homage variant covers by Benitez in tribute to the Image founders will also be available in a Kickstarter campaign launching later this month.

Set in an asylum full of grotesque inmates, sadistic guards, and a fanatical doctor, Lady Mechanika: The Monster of the Ministry of Hell introduces readers to a young lady who wakes to find her arms and legs have been replaced with mechanical limbs. But who among this gruesome menagerie is the true monster of the Ministry of Hell? The origins of the notorious Lady Mechanika!

“Image has always held a special place in my heart since it’s where I started my career, so I’m very happy to have Image be the new home for Lady M,” said Benitez. “I hope that by bringing her to Image she will be introduced to a whole new audience that didn’t know she existed out there in the comicverse. We’re crafting a bunch of fun, exciting, and cool new stories and adventures for our heroine and can’t wait to get them out there for you! This particular story is a great jumping on point for new readers, while existing fans will be excited to see more of Lady Mechanika’s past finally revealed!”

Lady Mechanika can best be described as the character-driven storytelling of Mary Shelley’s Frankenstein and Marjorie Liu and Sana Takeda’s Monstress wrapped in a dark Victorian atmosphere similar to Mirka Andolfo’s Mercy.

Lady Mechanika: The Monster of the Ministry of Hell #1 will be available at comic book shops on Wednesday, December 8:

Lady Mechanika: The Monster of the Ministry of Hell will also be available for purchase across many digital platforms, including Amazon Kindle, Apple Books, and Google Play.

These collected editions can be ordered at your local comic book shop or independent bookstore or via Amazon, Barnes & Noble, Books-a-Million, and Indigo.

THE SECRET ORIGIN OF DR. KILL IN TROVER SAVES THE UNIVERSE #3 FIRST LOOK