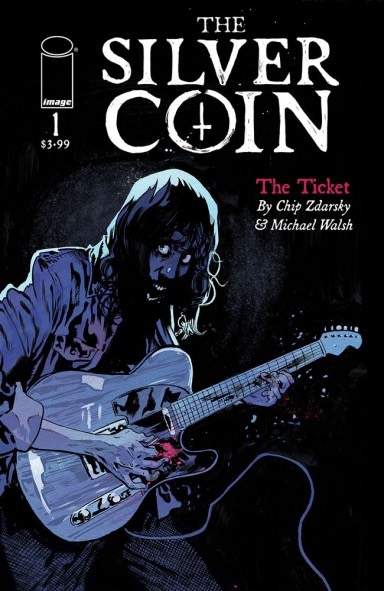 The Silver Coin #1 What would you do if a “lucky” coin could turn your life around? Would you trust the inexplicable in exchange for a chance at a better life? Image Comics anthology series explores exactly this, and the first issue takes us back to the ’70s. An era where disco thrived and rock and roll fought to stay alive. Nobody understands this more than Ryan, and his band The Running Reds. Playing to empty crowds, mediocre guitar riffs echoing from the garage where they spend their afternoons practicing. This all changes when Ryan comes across a silver coin, that causes his music, and soon his entire life, to turn on a dime. What starts as a seemingly harmless stroke of luck, can sometimes come at a price. The premiere issue of The Silver Coin bodes the question, can you strike while the iron is hot, without getting burned?

Throughout history, different cultures have had touch pieces that are considered lucky. Some cultures would even go as far as believe a coin could cure disease, or influence someone’s behavior. Anything from coins with holes in them, to Austrian beliefs, that coins found during a rainstorm are coins fallen from heaven, therefore are good luck. Now, this particular silver coin, as lucky as it may seem, has in thanks to Chip Zdarsky, developed what seems a personality in this premiere issue. This is complemented by the art and colors of Michael Walsh, who together bring this inanimate object to life, and follow it with the insignia of an eye, which not only ups the creep factor as it staring you down from upon the panel, but it adds to the perception that this is much more than your ordinary coin, in a way watching Ryan’s world unravel and burn to the ground(literally!)

Overall, Chip gives you a ride through that insane, beautiful mind of his, and brings Michael into the madness who brings rock and roll to life with his linework, rad colors, and some very rockin lettering that makes the pages just explode. If there’s one thing Walsh can do, it’s draw some pretty horrifying, realistic art that’s guaranteed to give you nightmares. This premiere issue is nearly flawless. Don’s be surprised if Zdarsky & Walsh end up in a Bill & Ted movie because these dudes can rock! What can you expect to see in the future for this anthology series? Death, destruction, and a not-so-lucky silver coin. Stay tuned, as the Silver Coin resurfaces in the ’90s with writer Kelly Thompson & the return of Michael Walsh.