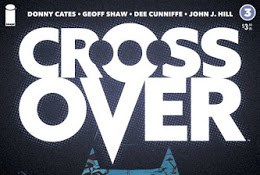 I am sure that everyone spent most of their childhood dreaming they would get to live amongst heroes. Hoping we’d look up and catch a glimpse of Superman as he zooms through the skies of Metropolis. Walking past Avengers Tower and hoping this would be the day you get to see an Avenger! Hoping one day you would get to do much as touch the rainbow bridge of Asgard. Who wouldn’t want to walk a dark alley of Gotham City… well okay, maybe not this last one.

Crossover has given us this and more… Something we failed to realize as children, is the fact that all the greatness of these heroes coming to our world, would also bring the horrors that plague these fictional worlds. Our worlds have collided albeit unsteadily.

Where issue # 1 succeeded in building the world in Crossover, issue # 2 succeeded in setting the foundation for the story. Issue 3 further builds on both of these, and simultaneously pushes the journey of our characters, and introduces us to a bigger world full of characters that we should not be surprised to see in this new Donnyverse. This is something I really appreciate from Donny Cates, he always finds ways to show us just how much he really enjoys writing comics.

Our first few pages build upon the premise of Ellie’s past. We get a quick look into the creation of the Dome and a very real reminder that unlike comic books, in the real world, fear turns most people into monsters. This is the recurring reality we can see in multitudes of media we consume, whether it be film, tv, or comic books. Humankind has always been notorious for fearing what it doesn’t understand, in this case, it was no different and bombs were our answer.

We get a quick cut to Ryan, poor, poor Ryan. Having just been released from custody, it seems as though he was safer behind the bars than outside of them. His father, having sent him on a “mission” that led to the burning of Otto’s comic shop, now looking for answers from Ryan with the use of his fists and verbal abuse that seems to hurt just as much.

This is where the book gets really interesting. But first, a little origin story of myself. I began reading comics right around when the Absolute Carnage event hit Marvel. It was my first full event I read. I was fascinated! I instantly became a fan of the writing and it led me down a path of picking up as many books as I could from Donny Cates. One of those books was Buzzkill. In this book, I was introduced to Doctor Blaqk. The best way I can describe him was how I described him on our podcast back when I first read Buzzkill. A great value Dr. Strange’s attitude resembles that of your uncle who owns a weed farm. Well, for those of you who enjoyed Buzzkill as much as I did, SURPRISE! Dr. Blaqk makes his way into Crossover. Hyped yet? Well shortly after riding in on their Dark Horse… ok bad pun but it’s the Paybacks! The repo men of Dark Horse Comics. This is a fantastic callback for another great series that Cates and Shaw gave us.

After a series of events that I will leave you in suspense on, mostly because you deserve to have that initial jaw-dropping moment that I enjoyed when I read it. We see our band of delinquents, now including Ryan, you’ll see… join Dr. Blaqk and the Paybacks through involuntary teleportation, in a much safer place than they were in previous panels. Ellie sees an opportunity to get some much-needed assistance to sneak into the Dome. After the initial reluctance and vague mention that they crossed paths at the request of a yet to be named character. Guess what? We are introduced to the person who sent the Paybacks to look for Ava. But first, what do you get when you cross Frank Sinatra & Albert Einstein? Frankenstein? No, that’s not right… Well regardless, all these are a common reference to none other than Frank Einstein or to those of you who might have seen him on the cover of a handful of indie publishers… MADMAN!

Overall, I absolutely enjoyed this issue. Like I mentioned before, it’s very easy to enjoy a series when the creators show how much fun they are having making it. Whether it’s Donny Cates meticulously building this new world with no rules, or Geoff Shaw rendering this ambiguous & chaotic world. The blend of art and colors is used to present us with a blend of what seems like different eras of comic books all sharing the same dance floor throughout the panels, and instead of these different presentations of art fighting each other, they complement each other and create a timeless presentation. All in all, is it messy at times? Yes, but that’s something to be appreciated about this series. We live among the chaos that is Crossover, I for one am buying into the hype.

Physical copies of Crossover #3 are available at local comic shops or at the Image Comics web store( visit Comic Shop Locator to find a comic shop near you.) Digital copies can be purchased from ComiXology, Amazon & Google Play.