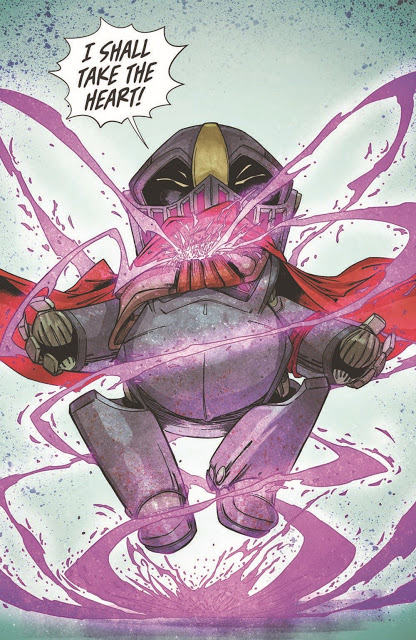 David Booher and Drew Zucker have created a magical world that new readers of today will look back on like we do with The Wizard of Oz.

Once again we find ourselves fairing farewell to our little tin hero. This time, with knowing that he will return for more adventures in 2021. His next journey will be “Canto & The City of Giants”. After having read the final issue of this mini-series, I can say with almost certainty, that this upcoming series will be concluding the journey that Booher and Zucker embarked on in 2019. I believe that very rarely do we know that we are experiencing a series that will become an icon in comic book history. This series will be talked about for a long time and finds its place, in my opinion, with the likes of Saga, Monstress & The Wicked + The Divine. We are witnessing the creation of a series that will inspire many of the future creators in the coming years!

In the final issue of our 5 issue mini-series of Canto II, Canto has made his way up the Yellow Mountain and into the Valley of the Lionhearted. He faces a choice to which many would be a difficult choice, but, as well all know, Canto’s selflessness has never been lacking. The choice, Canto’s heart for the Shrouded man’s heart. The words that followed were something that has haunted me since reading this issue. The mere speculation of what the repercussions of Canto’s choice are bigger than anything that he’s ever faced, and yet, his will has never been bigger, his resolve never stronger. And just as Canto is given a gateway to return home, he is given one last weapon that is stronger than anything the Shrouded Man can hope to ever wield. The constant theme of Canto, HOPE. How this will be represented is yet to be discovered, but, for anyone who has followed Canto, we know that even in times of doubt and despair, the glimmer of hope brightly shines in him. These pages were really a moment where Zucker and Aaron give you a glimpse of just how beautifully their art and colors have complemented each other. This has been a common theme throughout and the consistency and rapport they are building is something amazing to witness all on its own.

Now, the shrouded man, through means of his own has witnessed everything that happened in the Valley of the Lionhearted. Now, you’d think that having witnessed Canto take his own heart and make it his own with every intention of using it as a weapon to defeat him would raise an ounce of concern. We are surprised to learn that the Shrouded Man is indeed reprieved. Relieved to see that his heart, which once was out of reach as he could not enter the Valley of the Lionhearted, the one place, which according to him, he cannot go. Now, his heart is within his grasp and he has every intention of taking it back, by any means necessary.

Canto is reunited with his friends, who he chose to leave behind to protect them after the death of Veratta. After a brief reunion, Canto must advise his people that war is upon them. Although their tin warriors are trained and willing to fight, they simply lack the size and strength to hope to defeat the Shrouded Mans army. Albeit, they are not short in allies, as Canto has made many new friends on his journey and surely that can level the playing field. This is where I believe our journey will take us throughout 2021 as we see all the pieces aligning for what will inevitably be a final showdown for Canto and the Shrouded Man. Now, what hurdles our tin hero sees along the way still remains to be seen.

I for one am truly appreciative to see the scale of the Cantoverse growing to these proportions. We have now gone from the journey of one tin hero, who simply wanted to save a loved one, to a fight between good and evil that has the fate of so many hanging in the balance. A journey of proportions that rivals that of J.R.R. Tolkien’s The Lord of the Rings. Now, until we find ourselves on another journey with Canto, I leave you with a quote from one of the greatest writers of our time and a message I feel has resonated from Canto from the very beginning. “From a little spark may burst a flame” ~ Dante Alighier

Canto returns with more adventures this year, starting with Cato & The City of Giants in April. Visit IDW Publishing for more info.